An Ovarian Cyst is defined as any collection of fluid surrounded by thin wall within ovary, which is larger than about 2 cm. Ovarian Cysts occur in women of all ages and more frequently in females of childbearing age.

Ovarian Cysts are of two types :

Cause of Ovarian Cyst

Ovarian Cysts can arise from a number of reasons. Most common reason however is as follows :

As the Ovarian Follicle matures inside the ovary during a normal menstrual cycle, it grows in size. On the day of ovulation it ruptures and releases the egg outside to be carried to the Uterus via Fallopian tubes. However if it fails to rupture it forms a fluid filled structure with a thin wall covering and hence a Follicular Ovarian Cyst is formed.

Other reasons for formation of Ovarian Cysts are : 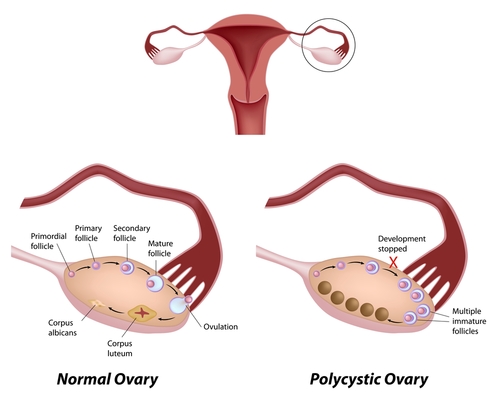 Signs and Symptoms of Ovarian Cyst

The Ovarian Cysts occur in almost in all normal females. Risk Factors are mentioned below :

Diagnosis is made in step wise fashion as follows :

Further testing may be done to confirm diagnosis or check for complications like Cancer. These include :

Ovarian Cysts are common in almost all females of the Childbearing age. However if a female is not planning on getting pregnant and feels uncomfortable with these Cysts she can prevent developing them. It is done by taking simple medication in form of Birthcontrol pills. These pills stop formation and proliferation of Ovarian Follicles. Hence Ovarian Cysts are not formed as they do with normal Menstrual Cycle.

As the Ovarian Cysts are a normal phenomena hence usually no particular treatment is required for normal Functional Ovarian Cysts. To relieve symptoms like pain etc following measures can be taken :

Pain Relieving Medication can be used. Most commonly used are Paracetamol and Ibuprofen etc.

Warmth applied to the Lower Abdomen in form of heating pads, warm bath or hot water bottle etc can relax the muscles of the abdomen. This results in decrease in tension and discomfort and increase in blood flow and healing of ovaries.

In case of complicated Ovarian Cysts (cause symptoms, or are Non-Functional or very large in size or Malignant etc.) Surgery is required.