“Duodenal ulcer, sometimes called peptic ulcer, is a breach in the mucosa of duodenum (first part of small intestine).”

The appearance of the ulcer can be

Initially they lack any visual differentiation from the surrounding tissue even in larger sizes. Convex ulcers lack any surface cratering or breaks in the mucosa.

Cause of Duodenal Ulcer

People once believed that eating spicy food was the main cause of these ulcers. Now research has shown that in addition to spicy food, there are several other causes like: 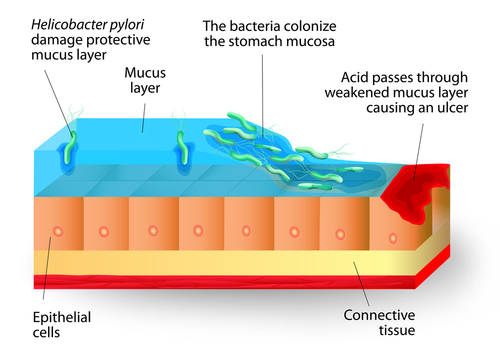 Signs and Symptoms of Duodenal Ulcer

Common symptoms of duodenal ulcers can be

Symptoms of duodenal ulcers may vary with age and severity. The timing of symptoms in relation to meal may differentiate duodenal ulcers from the stomach ulcers (gastric ulcer), as symptoms of duodenal ulcers would initially be relieved by the meals.The pyloric sphincter closes to concentrate the stomach contents, therefore acid stops reaching the duodenum. In contrast, the gastric ulcers would give epigastric pain during the meal. The pain caused by peptic ulcers can be felt anywhere from the navel up to the sternum. It may last from few minutes to several hours and it may be worse when the stomach is empty. Sometimes the pain may flare at night, and temporarily be relieved by the intake of food food or taking antacids medication.

The diagnosis is mainly established on the symptoms and history told by the patient. Many tests are performed and are typically performed when symptoms don’t relieve after few weeks of treatment.

The diagnosis of H.pylori can be made by cited below tests

Steps you can take to prevent ulcers are