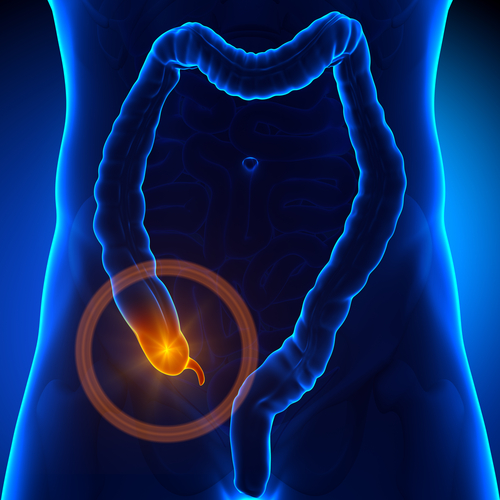 Inflammation of the Appendix, a three and a half inch long tube extending from the Large Intestine, is called Appendicitis. It is also called Epityphlitis and is a surgical emergency.

First described by Reginald Fitz in 1886, today Appendicitis is the most common cause of severe Acute Abdominal Pain. Case of Appendicitis requires the removal of Inflamed Appendix through procedures such as Laparotomy or Laparoscopy.

The functions of Appendix are still unclear but we can live without it, without any consequences. Untreated Inflamed Appendix eventually burst or perforates causing spilling of infectious material into the abdominal Cavity. This phenomenon leads to Peritonitis. This condition involves the inflammation of the lining of Abdominal Cavity called Peritoneum. Pus filled Abscess also forms outside the inflamed Appendix. Scar tissues of Abscess then separate the Appendix from rest of Abdomen.

Blockage of Appendix causes Appendicitis. This blockage can be due to Infection, because Appendix swells in response to any infection of body. Based on the experimental evidence Acute Appendicitis is caused by Primary Obstruction of Appendix Lumen (inside space of a tubular structure). This obstruction causes Appendix to fill up with Mucus as a result of which it swells up. Increasing pressure within the Lumen of Appendix results in two Processes i.e.

In rare cases there is a chance of Spontaneous recovery. If it progresses, Appendix becomes

Bacteria try to leak through dying walls of Appendix resulting in Pus formation within and around Appendix. This forming of Pus is called Suppuration. The end result of all this is Appendiceal Rupture also called Burst Appendix. Appendiceal Rupture is what leads to Peritonitis that in turn leads to Septicemia (whole body fatal Inflammation) and eventually Death.

Causative agents for Appendicitis are as follows.

Appendiceal Fecalith is associated with Complicated Appendicitis. Fecal Stasis and Fecal Arrest also plays a role in Appendicitis. Acute Appendicitis is an antecedent to following cancers.

Signs and Symptoms of Appendicitis

Common symptoms for Appendicitis are as follows.

Classic presentation for Acute Appendicitis is

Innervation of Appendix enters Spinal Cord at the same level of Umbilicus (Belly Button). Because of this reason, pain starts Stomach-high. As the appendix becomes more swollen with time and irritates the adjoining Abdominal Wall, the pain tends to move into the lower right Abdomen in several hours. Signs of it include:

In case of Retrocecal Appendix pressure on right lower abdomen fails to cause tenderness. This is because Cecum is filled with Gas protecting the Inflamed Appendix from pressure. If Appendix lies within Pelvis then Abdominal Rigidness is entirely absent. In these cases Rectal Examination points out tenderness in Rectovesical Pouch. Coughing causes point tenderness in Rectovesical Pouch, the point known as McBurney’s Point.

Risk factors for Appendicitis are as follows.

One of the risk factors for Appendiceal perforations is Age. It can occur in all age groups but is common in between ages of 11 and 20.

Males have higher rate of Perforated Appendicitis than Females. The male to female ratio is (1.4: 1). A male child suffering with Cystic Fibrosis has high risk for developing Appendicitis.

The risk factor for Appendicitis is most common in Whites and Hispanics than African Americans and Asians.

Risk for appendicitis is increased during the winter months between October and May.

Prior treatment with Antibiotics is also an independent risk factor for Appendicitis.

In patients with end stage Renal Disease risk factors include the following.

Increased CRP (C – reactive protein) can be a serious pathological severity for Appendicitis.

Some of the other factors that contribute to Appendicitis are as follows.

Recurrent Appendicitis has a rate of 72% in association with presence of Appendicolith. This rate was 26% in those having no Appendicolith.

Diagnosis of Appendicitis is based on patient’s History (symptoms) and physical examination backed up by increase in Neutrophil White Blood Cells. Histories are divided into two categories i.e.

Xiphoid Process of Sternum to first left and then right Iliac Fossa. Positive sign for it is the grimace of patient upon right sided sweep. It is due to the fact that Appendicitis causes irritation of well innervated Peritoneum.

Beside Physical examination some tests are also some test performed for Appendicitis. These tests are as follows.

Chances of Appendicitis are much lower in people who use High Fiber Diet. The exact reason of it is still unknown, but one possible reason for it is that Fibers make our Stool softer. This reduces the chance of stool getting stuck in Appendix. Foods high in fiber are as follows.

Acute Appendicitis is treated with surgery whereas in uncomplicated cases antibiotic can prove useful and safe. The treatment of Appendicitis includes the following.

Open surgery is performed right away if the patient have a ruptured Abscess or Appendix.