Chronic obstructive pulmonary disease (COPD) is a lung disease characterized by chronic obstruction of lung airflow that interferes with normal breathing and is not fully reversible. The more familiar terms ‘chronic bronchitis’ and ’emphysema’ are no longer used, but are now included within the COPD diagnosis. COPD is not simply “smoker’s cough” but an under-diagnosed, life-threatening lung disease.

Worldwide COPD effect 329 million people or nearly 5% of the population. In 2011, it was ranked as the 4th leading cause of the death, killing over 3 million people. The number of deaths is projected to increase due to higher smoking rates and an aging population in many countries. It resulted in an estimated economic cost of $2.1 trillion in 2010.

Following are some of the causes of COPD:

Smoking is the primary cause of COPD. In non-smokers passive smoking is the cause of 20% case reports. Other types of smoke e.g. marijuana, cigar, water pipe smoke also confer a risk. Smoking during pregnancy may increase the risk for child getting COPD in future.

Pollution is another important cause of COPD. In poorly ventilated areas with cooking fire fueled by biomass or coal are the main causes. Women make the major part of affected population due to direct exposure. However the percentage of COPD is higher in urban areas, with urban air pollution a major contributing factor in exacerbation.

Signs and Symptoms of COPD

The most common symptoms are: 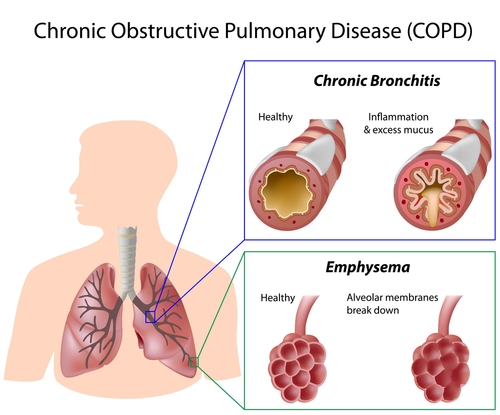 Cough is usually the first symptom. People with COPD often present with the history of “common cold” for long periods. By definition it is chronic bronchitis when it is present for more than three months a year for two years in combination with sputum production. This condition can appear when COPD is not fully developed yet. In some cases cough may not be present at all or may be non-productive if present. Some people attribute this to “smoker’s cough”. Excessive coughing may result in rib fractures and temporary loss of consciousness.

Sputum produced may change in amount over hours to days. People either swallow it or spit it out.

Shortness of breath is the symptom which bothers the most, and people come with the complaint that “I cannot get enough air in”. In COPD it takes longer than normal to breathe out than to breathe in. Typically the shortness of breath occurs on exertion but in advanced stages it may occur during rest or may be present all the times.

Other symptoms may include chest tightness and irritation of behavior.

Following are the risk factors for COPD:

Your doctor will diagnose COPD based on your signs and symptoms, your medical and family histories, and test results. Your doctor may ask whether you smoke or have had contact with lung irritants, such as secondhand smoke, air pollution, chemical fumes. Your doctor will examine you and use a stethoscope to listen for wheezing or other abnormal chest sounds. He or she also may recommend one or more tests to diagnose COPD.

Following measures should be taken to avoid COPD

The best way to prevent COPD is to not start smoking or to quit smoking. Smoking is the leading cause of COPD. If you smoke, talk with your doctor about programs and products that can help you quit. If you have trouble quitting smoking on your own, consider joining a support groups. Many hospitals, workplaces, and community groups offer classes to help people quit smoking. Ask your family members and friends to support you in your efforts to quit.

A number of measures should be taken to reduce the likelihood for those who work in high risk environment. These measures include education of workers, making public health policy and management about the risks.

Both indoor and outdoor quality should be improved to prevent COPD.one key effort is to reduce the exposure to smoke from cooking and other fuels by having a better ventilation system.

There is no cure but the symptoms are treatable and the progression can be delayed. The major goals of management are to reduce risk factors

The goals of COPD treatment include: