Brain Tumors are defined as abnormal growth of cells inside the cranium, an Intracranial Neoplasm. These tumors are formed due to uncontrolled and abnormal division of cells in different parts of the brain involving different cells.

In the Brain itself, cells that are involved are usually

Glial cells are actually the non neuronal cells of the brain with supporting functions like scaffoldings. These cells include:

Eyes are considered as the projections of human brain. Actually its retinal part is the derivative of the Diencephalon, one of the precursor parts of the brain. So, the tumor of retinal cells, called retinoblastoma, is normally included in the brain tumors. Brain meanings are formed of meningeal cells that may sometimes undergo malignant transformation leading to the formation of a tumor called Meningioma. Moreover, the pituitary gland present inside the brain may develop pituitary adenomas with of different cells present inside the pituitary presenting the different symptoms.

Cancers of other organs can also spread brain tumors. Such tumors are called Metastatic Tumors.

Brain tumor of any sort is serious and life threatening. The reason for it is that they perform invasive and infiltrative character in limited space of intracranial cavity.

Brain tumors can be of following two types.

These two types are entirely different from other cancerous or noncancerous neoplasms of body. Malignancy of tumor depends upon type, size, location and state of development of tumor.

Cause of Brain Tumor

Different kinds of chemicals, heavy elements and exposure to ionizing radiations are the causes of cancers. Vinyl chloride and Asbestos are the common environmental factors that cause brain tumors. Other causes for brain tumors are as follows.

However, mobile phone radiations are classified by WHO on IRAC scale in Group 2B that refers it possibly carcinogenic ability.

Signs and Symptoms of Brain Tumor

Signs and symptoms of brain tumors depend upon two factors i.e.

Brain tumors in different parts of the brain cause different neurological symptoms. Brain tumors mostly cause behavioral changes in the affected people. So, when the symptoms of patients suffering with brain tumors become apparent to people around them that is the first step in diagnosis of the tumor and its treatment. Symptoms of Primary and Secondary brain tumors are alike that are divided into three main groups as follows.

Intracranial hypertension leads to the increase in the size of the skull.

Tumor location and the damage it causes to surrounding brain structures following types of Focal Neurologic symptoms can occur in patient.

Primary brain tumors don’t show any apparent symptoms for years. Many uncertain symptoms like headaches, weariness and vomiting can be mistaken for Gastritis. Pain is felt usually on outside of skull not in brain. Brain outer surface has no nerves to transmit pain signals to brain’s pain center. That is why secondary symptoms explained earlier should alert patient for diagnosis.

Possible risk factors for development of a Brain Tumor in a person are as follows.

Chances of brain tumors are more in children than adults; however person of any age can be at risk.

There is risk factor for developing brain tumor upon exposure with everyday home products although there is no possible link for this evidence. These home and office exposures are as follows.

5% of brain tumors are associated with the following genetic factors.

Brain tumor risk is increased if as a child person suffered from cancer. People who had suffered from Leukemia or Non Hodgkin Lymphoma also are at risk for developing brain tumors.

Electromagnetic fields which increase the risk for developing brain tumors are as follows.

Previous treatment of brain or head with ionizing radiation like X-rays can be a possible risk factor for developing brain tumors.

People suffering with allergies like Eczema, Asthma and Hay fever have low risk for developing brain tumors especially Gliomas. This is due to increased immune system activity. 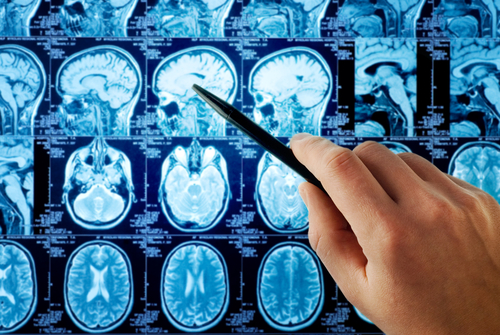 Complete medical history and physical examinations are carried out for diagnosing brain tumors. Most of the brain is separated by Blood-Brain-Barrier (BBB). Tracers can reach tumors if BBB is disrupted. In addition to physical test and medical history a series of tests are also performed for diagnosing brain tumors by detecting BBB disruption. These tests are as follows.

Until now there is no known way to prevent brain tumors. As more about their causes is known more will be the ways to prevent them.

Secondary brain tumors whose origin is in other organs can be prevented. For example avoiding tobacco products minimize Lung cancer risk which In turn decreases the chance for Lung Cancer Cells to ever appear in brain. For prevention against brain tumors a person should take some following steps.

Before the treatment to reduce swelling of brain tissues can commence, patient is given corticosteroid drugs. Combination of treatment like Surgery and Radiation Therapy is often used.

Most preferred course of action for treating brain tumors is their surgical removal. The surgery is known as Craniotomy. Meningiomas at the base of skull can be surgically removed by minimally invasive approach. Pituitary Adenomas can be surgically removed by minimal invasive approach through Nasal cavity and Skull base. This approach is called Tans Nasal, Trans Sphenoidal approach.  Craniotomy (opening of skull) is performed for removal of large Pituitary Adenomas. Person undergoing brain surgery can suffer Epileptic Seizures.

The procedure is to kill tumor cells without harming normal brain tissues. Depending on tumor, 10 to 30 treatments of radiations are used. This gives improved results and longer survival rates for patients. There are two types of radiation therapy i.e.

It is a treatment in which drugs are administered in patients for killing tumor cells. The treatment is generally performed for children instead of radiation to avoid negative effects on developing brain. The treatment is based on tumor’s type, extent of cancer and patient’s overall health. Radiation therapies and surgery is preferred because of the treatments following results.