Esophagus is the tube that carries food from the mouth to stomach. Cancer of this muscular tube is called the esophageal cancer. There are many categories of esophageal cancer and two of the important ones are squamous cell cancer (cancer of the cellular lining of esophagus) and adenocarcinoma (cancer of cells that secrete mucus and other fluids). Squamous cell cancer usually occur in the upper half of esophagus whereas adenocarcinoma in the lower half.

Cause of Esophageal Cancer

The exact cause of esophageal cancer is not known. It has been proposed under the light of some scientific research that consumption of alcohol and/or tobacco are among the highest risk factors of esophageal cancer. This happens due to damage to the DNA of cells lining the inner aspect of esophagus.

DNA is a part of our genetic system, present in cells. It controls all the functions of cell and holds information about its morphology (physical appearance). Among the vast number of functions, an important one is cell division. These cell division promoting genes are called oncogenes and their counter genes, genes that slow down the rate of cell division are called tumor suppressor genes. Therefore alteration in either of these two genes can lead to cancer (either increased activation of oncogenes or decreased activity of tumor suppressor gene or a combination of both).

Signs and Symptoms of Esophageal Cancer

There are many presentations of esophageal cancer, some of them are:

Most of the symptoms of esophageal cancer are no detected at early stage of disease. Patients complain of symptoms in the later stages when the tumor has grown to a much larger size, obstructing as much as half of the inside of esophagus (the lumen). This causes pain when food passes through such a narrow passage.

There are various risk factors of esophageal cancer which are as under:

Various examination techniques and tests that help in diagnosing esophageal cancer are given as follows:

Esophageal cancer can be prevented by avoiding the things that increase the risk of the disease. Some of the measures are as follows: 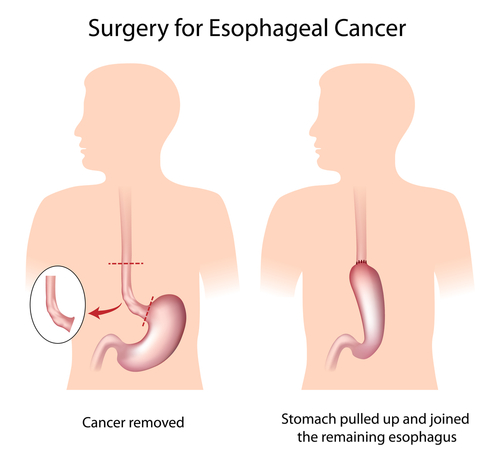 Treatment of esophageal cancer varies with the stage of the disease:

If a patient is in such a state of esophageal cancer that he/she cannot be treated with endoscopy, he is surgically treated:

Some of the non-surgical interventions for esophageal cancer are: