Asthma is derived from a Greek word which means “panting.” It is a chronic inflammatory disorder that leads to the blockage of the airways. It is characterized by bronchospasm and reversible airflow obstruction. Asthma most commonly starts during childhood but can affect people of all ages.

Asthma is caused by a number of environmental and genetic abnormalities and also their combination. Some of the causes are given below:

Many environmental factors have been implicated as the cause of asthma. Air pollution and allergens are top of the list. Cigarette smoking during pregnancy is also associated with a high risk of asthma. Common indoor allergens that may cause an attack of asthma are: dust mites, animal dander and mold. Some viruses like respiratory syncytial virus and rhinovirus are also related to asthma.

Asthma is found to be running in some families. If one of the identical twins is asthmatic, then the chances of the other being affected are 25%. Many genes that are linked to asthma have been found.

Although genetic abnormalities may alone be effective in producing the disease, it is mostly more troublesome when combined with some environmental factor. A good example is a genetic abnormality in “CD14” region and endotoxin (a bacterial product) exposure.

Obesity has been found to be linked to high risk of asthma. Adipose tissue leads to pro-inflammatory states and increased fats in obesity reduces respiratory function.

Some medications may also trigger asthma. Beta blockers, aspirin, NSAIDS and angiotensin-converting enzyme inhibitors can cause this problem. 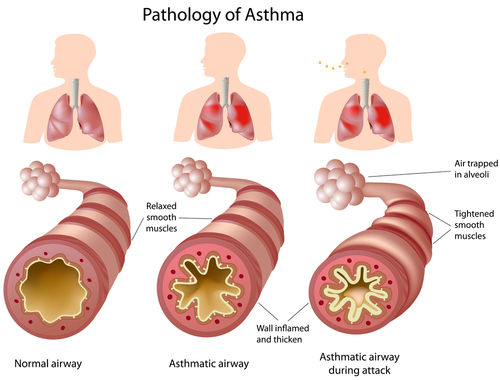 Signs and Symptoms of Asthma

There are some other health conditions that are more frequently seen in patients of asthma. These are:

There are number of risk factors that can increase the odds of developing asthma. Some of these are:

Unfortunately there is no precise test for asthma available. Its diagnosis is made through its signs and symptoms of wheezing, chest tightness, coughing and difficulty in breathing. These symptoms worsen with exercise, at dawn and dusk, and with exposure to dusk.

The diagnosis is confirmed by spirometry. In this test, if the FEV 1 is more than 12% after the administration of a bronchodilator drug then the diagnosis of asthma is confirmed.

There is no cure for asthma, however, its signs and symptoms can be improved. There are a lot of measures that can be taken for the management of asthma:

Most of these drugs are used in the form of inhalation products so that they may act on the target immediately and without any waste of the drug.