Pancreas is an organ that is located horizontally in the center of upper abdomen. When the cells of pancreas start to multiply in an uncontrolled fashion resulting in increased pancreatic size and lump formation, it is called pancreatic cancer. It is one of the most common types of cancers that occur throughout the world. Majority of pancreatic cancers are of its cells that lines the ducts, the pancreatic cancer of its secretory cells is less common as compared to that.

Cause of Pancreatic Cancer

Due to any cancer causing factor, there is defect in DNA (genetic makeup) of pancreatic cells that results in continuous and uncontrolled growth of those defective cells, thus forming a lump called cancer.

Following factors are the major cause of pancreatic cancer:

Signs and Symptoms of Pancreatic Cancer

Following signs and symptoms might be associated with the patient of pancreatic cancer:

Additional signs and symptoms are observed in case of the pancreatic cancer of its secretory cells (which is less common), that may include: 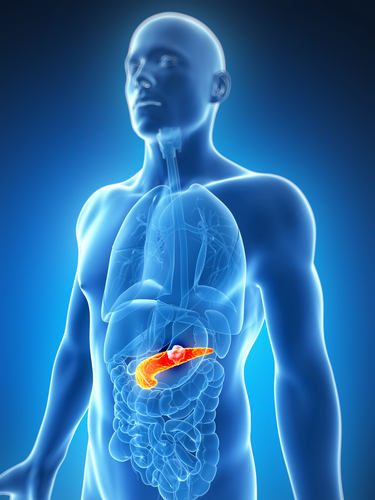 Following are the major risk factors that may contribute in formation of pancreatic cancer:

Pancreatic cancer, due to its non specific and vague signs and symptoms, is very difficult to diagnose and may be misdiagnosed. A doctor uses following approaches to make the diagnosis of pancreatic cancer:

On examination, the doctor may notice yellowing of eyes, enlarged mass (of gall bladder in case if bile duct is blocked) on right side of abdomen, swollen lymph nodes, and weakness etc. The pancreas cannot be palpated even if it is enlarged because it is covered by the gut

Endoluminal ultrasonography (in case, if a dark shadow is seen in MRI or CT scan image then to confirm the diagnosis, this procedure can be performed. In this procedure, a small and flexible tube called endoscope, which has an ultrasound probe attached to its mouth is passed from mouth to stomach where it takes pictures of pancreas. As it is very close to pancreas, clear and refined images of pancreas can be taken by this procedure)

A small part of pancreatic tissue is obtained where cancer is suspected, dyed with stain and observed under microscope for confirming the presence of cancer

Tumor markers (specific substance that is elevated in that particular type of cancer) for pancreatic cancer are assessed.

Pancreatic cancer, even if detected at early stage has very poor prognosis and it develops very rapidly. That is why the death rates due to pancreatic cancer are high.

The treatment of pancreatic cancer, like other cancers depends on following factors:

Following are the treatment options available for pancreatic cancer:

Removal of part of pancreas with cancer in early stage but in case of advance stage cancer the whole portion of pancreas is removed.

High energy radiations are used to kill cancer cells. Used mostly in early stage of cancer solely or can be used with surgery for fast recovery from cancer.

Drugs are used to target the cancer cells.  This method is used mostly in early stage of cancer solely or can be used with surgery for fast recovery from cancer