Gallbladder is an organ that is present just below the liver, on right side of the body, in the upper abdominal region. In appearance, it is pear shaped. It stores a fluid called bile (greenish liquid), which is secreted from liver. From liver, it is stored temporarily in gallbladder where it is concentrated. It is secreted from gallbladder into the first part of intestine through bile duct (narrow duct extending from gall bladder to intestine, joining with other ducts in its pathway), where it helps in the absorption of fat.

The hard, stone like mass or masses formed inside the gallbladder or its duct are called gallstones. In medical science, this is called cholelithiasis. Gallstones may be one or more than one in number. There are numerous sizes of gallstones. They may be as small as a grain of sand or may be as large as a golf ball. These are formed mainly in gallbladder but they may migrate as a whole or a part of them migrates to the narrow bile duct or other associated ducts causing further complication of this condition. When the gallstones are present in the common bile duct, clinically, it is called choledocholithiasis. Following are the three main types of gallstones, based on their chemical composition: 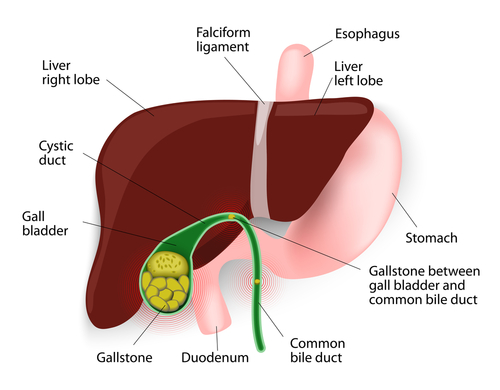 Under certain circumstances, when there is some imbalance of substances in body, the substances that are present inside gallbladder as a part of bile (like cholesterol, calcium, calcium carbonate and bilirubin etc) are concentrated and start forming small masses in the bile. With the passage of time, these masses grow in size and are hardened into stone like structures called gallstones. These stones, with the passage of time, increase in size and start filling the lumen of gallbladder. Gallstones are mostly made of different proportions of the substances present inside gallbladder (like mixed gallstones). Rarely, these are made of one pure substance (like cholesterol or pigment gallstones). The composition of gallstones is affected by:

Following are the major causes of gallstones formation:

Signs and Symptoms of Gallstones

Most of the time, these stones are asymptomatic, meaning no signs and symptoms are present. The reason is that the gallstones generally stay in the gallbladder and do not cause any problem inside it (that is why they are also called silent stones). However, sometimes they show typical signs and symptoms.

Typical signs and symptoms associated with gallstones are:

When gallstones from gallbladder travel down the duct and are large enough to block it, the flow of bile is obstructed. In that case bile goes into the blood and causes additional signs and symptoms of jaundice (yellowing of eyes and skin).

The most common and important sign and symptom of gallstones is biliary colic. It is a very specific, severely painful condition that is associated with sudden obstruction of common bile duct or hepatic duct. It is ar symptom that is present in majority people having gallstones.

It is a constant pain that develops suddenly or rapidly within few minutes. It lasts for 15 minutes or about 5 hours. This is a recurring pain, which means after first episode there are fair chances of other episodes as well.

The pain of gallstones must always be differentiated from heartburn, liver problems, stomach flu and food poisoning because these conditions also have almost similar signs and symptoms as the gallstones.

Following are some of the most common risk factors for gallstones formation:

Gallstones are mostly asymptomatic so they are diagnosed when their complications occur and signs and symptoms start appearing or accidently when a patient is being monitored for another illness etc. Following are the most common procedures that are used for the diagnosis of gallstones:

Following are the treatment options for the gallstones:

Gallstones do not indicate a defect in gallbladder. It simply shows some imbalance of substances in the body and this imbalance must be corrected first by proper medication rather than removing the gallbladder. In addition to that, some medicines are given orally to dissolve or break the gallstones inside the body.

It is only done in patients showing symptoms or the use of medicines is not giving desired results. The surgical procedure done in that case is the removal of gallbladder, called cholecystectomy. The removal of gallbladder does not cause any serious negative effect on body because the liver can produce enough bile for normal body function.

However, in some people, after surgery, post-cholecystectomy syndrome develops. In that case there is git distress, continuous pain in upper abdomen, on right side and sometimes chronic diarrhea.

In that procedure, gallstones are broken by using ultrasound shock waves on body.

It is done in rare cases when the medicines, surgery and other procedures are not an option for the patient.If the signs and symptoms of gallstones continue after treatment, even after the removal of gallbladder, that might means: