Aneurysms are classified into three groups:

An aneurysm may either be a true aneurysm or a false aneurysm. In true aneurysm all the layers of the vessel wall (intima, media and tunica) are involved and include atherosclerotic, syphilitic and congenital aneurysms.

False (pseudo) aneurysms may be caused by trauma to the vessel that punctures it. In this case the blood leaks out of the vessel and stays confined to it by the surrounding tissue. This injury may result from a knife, bullet or during injection into the artery.

Aneurysms may differ in their macroscopic size and shape. They may be either saccular or fusiform.

Saccular aneurysms are spherical. They are often filled by a thrombus and involve only a portion of the vessel.

Fusiform aneurysms are variable in size and diameter. They usually involve a larger portion of the vessel wall.

Aneurysms are found in different location in different situations. They may be found in the arteries or veins, heart, aorta, brain, legs, kidneys, etc. 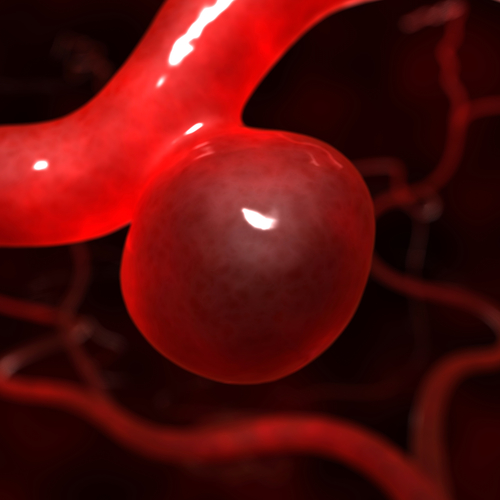 Aneurysms develop when the blood vessels get weak. There are a number of acquired and inherited cause of aneurysms. The infective causes are:

Some of the inherited ones are:

Signs and Symptoms of Aneurysm

The clinical presentation of aneurysms vary and depend on the location of aneurysm. In some instances there may be a life threatening complication like hypovolemic shock and in the others it may be incidentally found on X-ray.

These symptoms arise when the aneurysm pushes or compresses an adjacent area of the brain.

Aneurysm in the region of the abdomen can cause:

Risk factors for an aneurysm include:

Diagnosis of an aneurysm is usually made through Computed Tomography (CT) scan. In some cases, however, lumbar puncture is also done. The need for this arises when there is suspicion of a ruptured aneurysm in the brain.

Steps you can take to avoid other risk factors include:

The treatment for aneurysm is mostly done through a surgical procedure in which the area of the aneurysm is targeted and either clipping or endovascular coiling is done. Sometimes bypassing is also done.