Cancer is a disease in which the cells of any part of body starts multiplying without any limit and thus causes the formation of an abnormal tumor (lump).  The stomach is a muscular bag like organ that is located in left side of upper abdomen. Gastric cancer is the cancer of any part of the stomach. So the abnormal growth of stomach cells in its any part is called the gastric cancer. The cancer of mucous (inside wall) of stomach which is called adenocarcinoma is the most common type of gastric cancer.

Cause of Gastric Cancer

Following can be the cause of gastric cancer:

Signs and Symptoms of Gastric Cancer

The early stage of stomach cancer may not produce any signs and symptoms or may resemble those of gastric ulcer i.e.

Because of this reason it is misunderstood as gastric ulcer or any other non lethal stomach problem. Other specific signs and symptoms related to cancer appear mostly after the gastric cancer has become large enough to cause life threatening condition, thus in advance stage of cancer: 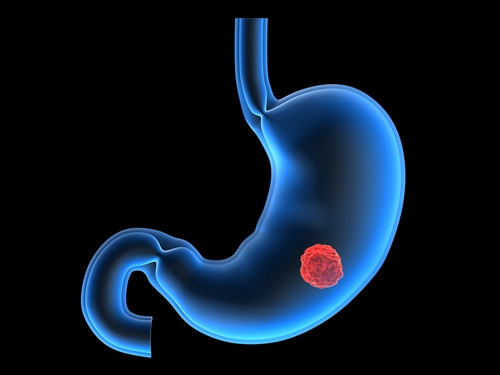 Most common risk factors that may cause gastric cancer are:

Most of the time, gastric cancer is diagnosed at its advanced stages because of late representation of its signs and symptoms or confusion of the disease with other problems of stomach.

Prevention of cancer can be carried out if the risk factors are avoided or reduced. Following preventive measures can be used to prevent gastric cancer:

The treatment of gastric cancer depends on following factors:

High energy radiations are used to kill cancer cells. Used mostly in early stage of cancer solely or can be used with surgery for fast recovery from cancer

Drugs are used to target the cancer cells. . Used mostly in early stage of cancer solely or can be used with surgery for fast recovery from cancer